OM :
OM is most sacred sound of Hinduism and also referred as Omkaram. In Sanskrit it is described as Pranava-Nadha means primary or root for all sounds. It should be pronounced as A-U-M. Every mantra in Hinduism OM is added at the beginning and ending phrases to acquire power to that mantra.

Cultural belief:
Hindus believe that the letters (A-U-M) in OM represents 'Trimurthi' (Lord Shiva,Lord Vishnu and Lord Brahma) . The sound removes all sorts of worries,sins and brings inner peace to chanter.  OM is Un-Manifested form of Lord.Om is considered as origin,center and end of everything. Om is the only sound that makes a person to reach peak of spiritual life and shows supreme reality. The planets which revolve around the sun make a noise which is called as OM.  Chanting sacred OM synchronizes the body with the vibration of the universe.OM is considered as NAME and FORM of absolute.Chanting OM purifies the mind,soul and creates inner peace. Ancient texts state that OM is 'Anahata Nada' (The sound that is not produced by striking two objects). According to the Maitri Upanishad OM represents the primeval vibration of Universe, OM is the Center of the Universe. OM is the seed of infinite knowledge.

Planet Saturn is called as Lord Shani and weekday Saturday is dedicated to Lord Shanidev.Lord shani is also called as Chayaputra or Raviputra as he is born to Lord Surya and Goddess Chayadevi.'Shani tryodasi' which comes with tryodashi (Lunar day of Hindus) on Saturday, 'Shani Amavasya' which comes on new moon day Saturday are considered as auspicious days for worshiping the Lord. New moon day which comes on Vaishakha or Jyaishta month according to Hindu calendar is considered as the birth anniversary of Lord Saturn. Planet Saturn is powerful giver and destroyer.

Lord Shani was believed as a form of Lord Shiva. Lord Yama(death god) is elder brother of Lord Saturn.Shani puja on Saturdays will please Lord Saturn and will be blessed with removal of hardships.Shani Tilabhishekam,Shani Pradosh Vratam,Shani Tila puja,Shani hawan and Shani Shodashopachara poojas  are considered as very much auspicious. Shodashopachara pooja(16 steps of prayer) is considered as the powerful prayer which is explained below.

Bathing:
Bathing is an important daily ritual in Hinduism. Every person belonging to Hinduism will complete the ritual daily 1-3 times. Oil bath(Abhyangana Snanam) is one of the ancient techniques in bathing. Coconut oil, Cow Ghee, Castor oil or sesame oil with a special homemade bath powder(Nalugu Pindi) are used in this special type of bathing. One of the oils is applied on the body and gently massaged to all parts of the body which should be done for 30 minutes. Later after massage, the bath powder is used as the cleansing solution on the body. By this bath, several skin diseases, toxins, bad odors would be eliminated. This bathing benefits with good sleep, nourishes the skin, improves digestion and gives strength to all parts of the body.

Cultural Beliefs:
According to Ancient texts, there are 5 types of bath.
1)'Nitya snan': Normal bathing ritual which is performed daily.
2)'Nimittika snan': This is performed after completion of certain types of situations like after eclipse, vomiting, saloon, bad dreams, sex, touching bones, visiting cemetery, touching women after pregnancy, touching women at the time of menstrual period, touching a dead person.
3)'Kamya Snan': Completing bath with a desire like bath while visiting a temple, festivals, important days, Karthika masam, important days.
4)'Mukya Snan': It is subdivided in to 2 types.

5)'Amukya or Gowna Snan' : Taking bath without water. This is subdivided into 5 types.
Bathing effects on each week day:
Results of Bathing when some ingredients are added:
Interesting Facts:
Their is a popular belief that taking bath in the waters of Rama Setu(Adams bridge),'Rameshwaram/Dhanshkoti' will be blessed with pregnancy.


Bathing - An Ancient Method of Body Cleaning - I


Holy Bael Tree:
Holy Beal or Bilwa tree (Aegle marmelos) is sacred tree and used to worship Lord Shiva. Bael tree grows in several countries especially in Asain countries like India it has highest value in religious rituals. It was used as medicine and essential food product from ancient age. Bael tree can sustain different temperatures, PH values of soil and can grow where no other tree take life. Bael fruit taste like citrus fruit. Single leaf is a combination of three or five or seven leaflets.

Cultural Beliefs:
The bael leave considered as the three eyes or trident weapon of Lord Shiva. The bael fruit sometimes referred as Shreephal and worshiped in many hindu houses.

Beal leaves offering to Lord Shiva at the time Mahashivaratri festival is considered as auspicious. Lord Venkateswara also worshipped with beal leaves during Friday. According to Swami Shivananda the beal tree can eliminate diseases caused by imbalance of wind and strengthens immunity system of the body.

According to skanda purana bael tree originated from the sweat of Goddess Lakshmi or Parvathi which was fallen on the mountain Mandra. The beal tree emits positive frequencies and eliminates negative energies in the persons who came near to the tree.

A cruel hunter ‘Gurudruh’ accidentally climbed bilwa tree near a pond to hunt animals which comes to quench their thirst by drinking water in pond. A Shiva linga was there beneath the sacred tree. And It was an auspicious day ‘Maha Shivaratri’. Without sleeping he waited the whole night on the tree and chewed bilwa leaves and dropped the leaves on shiva linga. Without any conscious effort, hunter transformed knowledgeable person and attain moksha with grace of Lord Shiva on auspicious day.

The below verses explains 8 different kinds of medicinal plants which are called as bilvas used to worship god.

Bael tree is very dearer to Goddess Mahalakshmi and offering bael leaf to Goddess Lakshmi on friday is considered as auspicious. Below versus in Sri Sooktam(Hymns of goddess Lakshmi) explains about bael tree.

Scientific Reasons:
Bilwashtakam- One of Hymns of Lord Shiva which is powerful mantra explains about Bael Tree.

Cultural Beliefs:
Ancient Texts states that Lord Shiva burnt Kamadev (God of Desire) into ash due to disturbing his meditation. In Hinduism people believe that sacred ash will remove all the sins and purifies ones soul. Vibhuti destroys evils and gives glory by protecting from several diseases. Below mantra should be recited while applying sacred ash on body.

Tradition of eating food with hands


Tradition of eating food with hands:
In majority, people from Asian countries eat with hands. Some say it unhygienic; Some say it’s a bad manner. But, tradition explains it in opposite way "Eating with hands not only feeds body and also feeds soul". According to Ancient Ayurveda, all the nerves connected to main parts of body are interlinked and ends at the hands and feet. Certain postures with figures apply pressure on the connected parts and make them function superior. We also relate it to Acupuncture method of healing and postures(mudras) in classical dances like Bharatanatyam.

Cultural belief:
Fingers are considered as the most vital and precious for any type of action. According to Ancient texts of Ayurveda, each finger is related to one of the five elements. Thumb is fire, Fore finger is Air, Middle finger is ether, Ring finger is earth and little finger is water. You might see small children sucking thumbs which internally aid digestion.

In Hinduism fingers are vital and important parts of body. Below Sanskrit verses explains the importance.

Each finger aids better digestion process by releasing digestive juices and makes the person conscious about taste and smell.

According to Ayurveda, we should take Ginger + Rock salt (1-2grams) before 30min of taking meal. Ginger will eliminate bile secretion disorders. Rock salt will control all disorders, cleans tongue and throat, improves taste in mouth and makes the body ready to take a meal.

We should always pray Brahma, Vishnu, Shiva and Anjaneya to remove evil eye of others on us while eating. 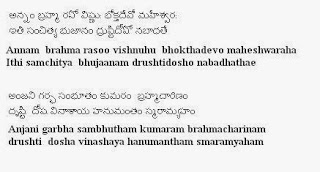 Scientific Reasons:
Many healthy bacteria live in the body which protects us from outer environment. Normal flora bacteria is one such type which colonizes in different parts of body. When we eat food with our hands these helpful bacteria mix with food and reaches to gut and keeps body healthy. People eating without using hand will always suffer from acute gastroenteritis when sudden change in environment. Whenever figures touches food, signals will reach to brain and brain prepares digestive process to receive and absorb the food by releasing digestive acids. By touching the food with fingers senses can feel the temperature of food what we intake. Taking food with fingers to the mouth and using thumb to push food into mouth without keeping all fingers in mouth is considered as highly beneficial.
If we eat food by sitting on the floor in the posture of Padmasana, it makes you eat according to digestive capacity of stomach and restricts without taking excess food. It improves digestion by producing enough enzymes to digest food in stomach. It relaxes mind by reducing muscular tension and controlling blood pressure.
Posted by straight_to_heart at Sunday, December 08, 2013 5 comments: